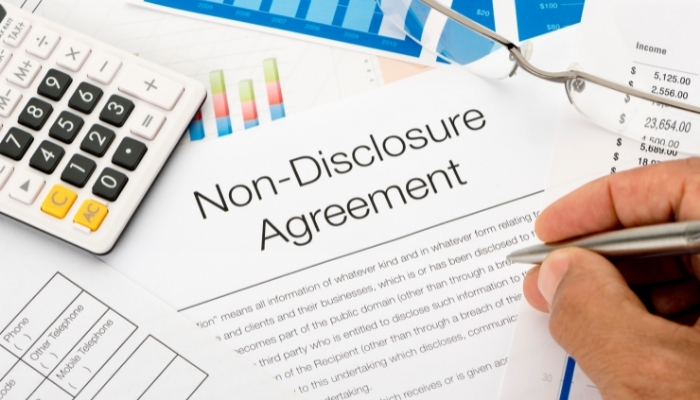 How to easily write a non-disclosure agreement for software development?

Why is NDA important?

Non-disclosure agreements are an important legal document used to protect sensitive and confidential information being revealed by the disclosing party to the receiving party. To name a few situations, an NDA could come in handy when entering into a business deal with an outside party, starting a new project or hiring new employees. This ensures that crucial information like trade secrets, business strategies, proprietary information, etc. is protected from being made public.

Specifically, non-disclosure agreements are not a requirement in the software development process, but it is recommended when the information being disclosed to the outsourcing company includes confidential information.

Before you start writing a non-disclosure agreement for software development, it is important to consider what it is needed for and if it is essential. If for instance, all you require is a simple website or mobile app, then the legalities involved would only slow down the process.

However, if you are required to share trade secrets, source codes or other sensitive information or keep the project undisclosed, then it would be a wise decision to write a non-disclosure agreement for software development.

After establishing the reasons for which your business requires an non-disclosure agreement for software development, the next step is to understand the two types of NDAs.

How to write a non-disclosure agreement for software development

Although there is no particular method to follow when drafting a non-disclosure agreement for software development, yet there are a few things to keep in mind that will allow you to write a strong NDA. A number of areas you should always cover in your NDAs are:

Parties to the Agreement

Under this section, it must be clarified which parties are to be included within the scope of the confidential information being shared. ​​​​​​​​​​​For software development, this would include the disclosing party as well as the software developer. Additionally, it is also recommended to include other team members like designers, product managers, etc who will also require access to sensitive information.

​​​​​​​This section defines what form of information will be included in the confidentiality clause. This could mean written or oral form of communicating the information. It should be clearly defined to prevent the receiving party from discovering any loopholes.

There are two forms of obligations involved for the receiving party.

The first is a  commitment to keep the information a secret. Secondly, the reason an NDA is extremely useful during software development is that the receiving party has an obligation to not use the information for their own benefit.

The receiving party may only use the information for the uses already mentioned in the NDA. Additionally, they may only share it with individuals who require it for purposes listed in the NDA.

Duration of the Agreement

It is important to specify the duration of an NDA. Usually, it is defined as a time period of two or three years but could be more or less depending on each business. The NDA may also be considered to remain effective till the time that the information is considered confidential. If the information is revealed or if the disclosing party gives a notice to the receiving party, then also the NDA may be terminated.

Without a clear description outlining the consequences of breaching a non-disclosure agreement, there is no purpose behind such an agreement. Usually, this section involves financial compensation for the disclosing party.

Although, these aspects of an NDA are extremely important, yet there are a few more things you should keep in mind to uphold the validity of the non-disclosure agreement.

For software development, non-disclosure agreements are not `necessary but it is always advisable to write one. Furthermore, it is vital that you carefully consider and include all parties in the agreement who require access to the information. Your NDA should have a clearly defined confidentiality clause that protects all your sensitive information and the obligations of the receiving party towards this information should also be made clear.