Parting is always painful and in the particular break of the marriage relationship, Divorce, is more painful and may cause the most confusing time in anyone’s life. It is never an easy process to get over the breakup of a marriage relationship as any break of a relationship causes stress and anxiety with emotion and stress. Nowadays divorce has become a common phenomenon due to various socio-economic and fast-paced scenarios.

Though it is really unfortunate that this is becoming common these days, the process to overcome the difficulties of all parties has become the need of the hour.

Whether one is choosing a mutual consent divorce or contesting it, the spouses need to know a few things about both options.

In case both the spouses want to part ways with their relationship by mutual consent the divorce process in India takes two years.

In case, one of the spouses is not on agreeable terms then it becomes a contested divorce, then the period is longer, ranging from three to five years, this is due to snags, the possibility that either party can challenge the decision in the High Court and even approach the Supreme Court of India.

The basic documents that are required to be submitted for filing divorce-on-mutual-consent are:

There may be situations based on certain circumstances; some other documents may be asked by the lawyers and/or court in case the petition is contested by one of the spouses.

Marriage Act 1955 details, protects and facilitates by law on marriage relationships for both spouses. The mutual consent divorce is filed under Section 13B of this Act and Section 13 if otherwise, means contested by one of the spouses.

In the case of contested, one of the spouses needs to file the petition through one of the lawyers and the other spouse needs to contest by appointing a different lawyer. There need to be reasons for the petition by the applicant. The lawyers of both may mediate and could arrive at a decision or else it would be addressed by the Court of Law as per Marriage Act 1955 section 13.

Usually, the Divorce process in India – the application with consent takes relatively less time, say 1 or 2 years; The contested Divorce petition might stretch to years – possibly 3 to 5 years.

The court fee is nominal at Rs 15 and with other paperwork, it may not exceed Rs. 250. However, the charges and other service fees are levied by lawyers as their professional charges – whether it is mutual or has been contested.

In India, there is a special legal aid cell that provides free legal services, particularly for women. However, the private lawyers would charge a hefty amount in the range of Rs.10,000 to 100 thousand and sometimes it could turn out to be more particularly in contested scenarios, as it would stretch the duration of the case.

Under the divorce process in India:

According to the Hindu Marriage Act, 1955, a petition filed under ‘mutual divorce’ can be carried forward if the two parties have decided to bid adieu and part their ways, legally.

If not, and one member wishes to part their ways with another (who isn’t willing to give consent) – it falls under ‘Contested Divorce’.

Produce a divorce notice to your spouse, this is towards clarifying the emotions, a legal and binding platform to initiate your thoughts on discontinuing your marriage.

Legal notice for divorce will bring clarity to the future of the relationship. The legal notice is towards the communication of current feelings and is a formal one to break the marriage.

The divorce process in India for mutual divorce:

Step 1: Petition to file for a divorce

If you are wondering ‘How to get a divorce in India from wife’ or ‘How to get a divorce from husband’ – it starts with a joint petition for disbanding the marriage. It will be presented to the family court by the parties concerned, stating that they are unable to follow the conditions and they have come to terms to part their ways.

Step 2: The parties must appear before the court

After the procedure has been initiated, the parties appear before the court and the entity shall do its due diligence. The court may try to reconcile the spouses, if in vain, the divorce process proceeds.

After the petition is scrutinized and satisfied by the court, the statements of all concerned parties will be recorded under oath.

Step 4: The first motion will be passed

The statements are recorded, an order is passed, and six months of time is provided for the second motion to be passed.

Step 5: Final hearing of the petition

After the parties appear for the second motion, and if everything is a smooth sail, they can proceed with the final hearings of the case.

Step 6: Verdict on the Divorce

When it comes to a mutual divorce, both parties have given consent, and there will not be any differences regarding alimony, custody of children, maintenance, property, etc

A harmonious agreement where the spouses are on the same page is important to dissolve the marriage.

If the court is satisfied after hearing the allegations – and if there is no means of reconciliation and cohabitation, the verdict shall pass on as ‘marriage dissolved’.

If you are concerned about ‘how to file a divorce online’ – it is feasible. Lawyers, presenting your arguments in Family Court, and recurring meetings to stick to the process is crucial. Please read further to know more.

The divorce process in India for Contested Divorce (2)

Step 1: The petition is filed by the husband or wife:

As previously indicated, in a contentious divorce, only one side is necessary to contact a lawyer. The husband or wife seeking divorce would be expected to clarify the facts, and the lawyer would be obliged to create the petition based on the facts and circumstances as stated and narrated by the husband or wife requesting divorce.

Step 2: The court issues a summons and asks the other spouse to respond:

Once the petition has been prepared and all formalities have been fulfilled, it would be filed before the appropriate family court, depending upon the jurisdiction.

Step 3: The court may advise that the parties reconcile:

On the first day of the hearing, the court would examine the petition and hear the lawyer making the petitioner’s opening arguments (concerning the claims and reasons).

Step 4: Witnesses and evidence are examined and cross-examined:

Once the court is satisfied that the case should go to adjudication, it will issue a notice to be served on the opposing party. After then, the other party would receive a copy of the petition and the notice, and he or she would be required to attend in court with their counsel on the next hearing date. The opposing party would be required to respond to the divorce petition as well as any further applications that may be filed.

To begin, the Court will attempt to mediate the dispute between the parties and may order them to attend Mediation in order to achieve an acceptable agreement. After appearing in front of a mediator for mediation, if the mediation is unsuccessful or fruitless, the court will proceed with the divorce procedures.

The court would next proceed to formulate issues and record evidence in the case. Both parties would have to present evidence, be cross-examined, and provide supporting witnesses. This is the most important component of the entire process since it determines the case’s outcome.

During the divorce process in India: the discussions between both parties, there are three aspects one must consider to reach a consensus.

i) Alimony and maintenance issues. As per law, there is no minimum or maximum amount. It could be no money or any money.

ii) Custody of their young ones is a crucial aspect the spouses must consider. This must be spoken to amongst the stakeholders and they must come to a consensus on shared or exclusive custody of the children.

iii) Property is the next issue. Husbands and wives should integrate their assets and distribute them accordingly. This includes movable and immovable property. It must be agreed by both parties – even to the minute of the decisions – which includes bank account(s). (3)

If you would like to clarify your doubts and know more about the divorce process in India and divorce law in India, contact eSahayak. 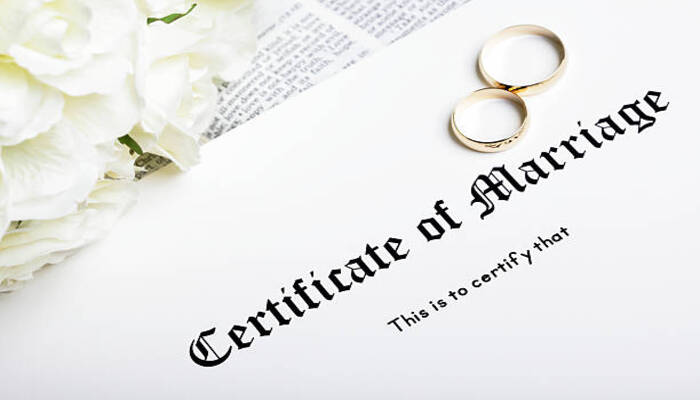 How to get an online marriage certificate?